In these difficult economic times it is fair to say that Ireland may currently lack a bit of confidence on the international stage. So it is refreshing to hear a story of major Irish success on the sporting front that might have gone largely unnoticed by many.
It’s a story of Irish ingenuity, hard work and determination, plus a timely reminder that even with the odds stacked against them the Irish are capable of taking on the best in Europe and coming out on top.
Last month Irish Rallycross driver Derek Tohill, and his Rallycross Rebels team celebrated being crowned FIA European Rallycross Division II champions. It was a feat made all the more remarkable when you consider that its was their first full season of competitive European competition and the fact that their operating budget was a fraction of some of their high flying Scandinavian competitors. 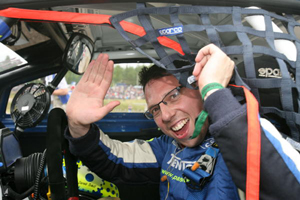 Indeed the sport of Rallycross is huge in the rest of Europe with events regularly attracting crowds of 40,000 plus. However, the Championship has up to now been largely off the radar of Irish competitors, with no Irish driver having ever won even a round before Derek.
The Rallycross Rebels all come from Irish automotive backgrounds and significantly the key members of the Rebels team all have competitive driving experience on the Irish Rallycross circuit something which Derek says was invaluable when it came to facing the challenges of the season.

After extensive planning the team settled on a highly modified rear wheel drive Ford Fiesta Mk7 as its competition car. With testing scheduled for Sweden in April it wasn’t long before the first set back showed them the shear scale of the challenge that they faced. Derek says, “A few days before testing was due to start the volcanic ash cloud descended which meant we could not fly. We took the decision to travel by ferry and road to the remote test track in Northern Sweden and I must admit that with the distances and travelling time involved we really wondered what we had let ourselves in for.”
When the season proper eventually got under way the challenge facing the team became even more apparent as they competed often for the first time on unfamiliar circuits and travelled to many distant corners of Europe. Derek says, “The logistics of getting the team, the car and all our equipment to some of the venues was really tough.” He added, “We always had that bit more travelling to do than other teams and this takes its toll on everyone involved.”
In the circumstances the start that Derek and the Rallycross Rebels recorded was impressive with early signs of encouragement with some fastest lap times and placements of third in Portugal and fifth in France.
The turning point for the team came in the UK round of the championship at Lydden Hill in Kent. It was the first event in striking distance of any significant kind of Irish motorsport support and it was Irish spectator observations that lead to some crucial adjustments to the car. With this and the strong emerald green support, Derek was able to claim his first victory giving the whole team a genuine kick start for the rest of season.

With the Rallycross Rebels team learning all the time, performances were hugely impressive in the following rounds with many vastly experienced European Rallycross competitors genuinely surprised by the speed and consistency of the Irish team and driver. Wins in Belgium and Germany, a second place in Poland and thirds in Sweden and Finland meant Derek had a small advantage in the overall championship going into the final round. 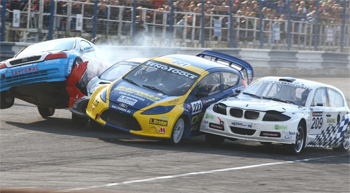 The finale of the season was to take place in the Czech Republic with Derek having to achieve a better placing than his nearest rival to take the crown. However, other competitors warned the team that as well as competing against Knut Ove Børseth in his Fiesta, they could also expect to be up against the “rest of Norway” as a large contingent of Norwegian competitors would try to ensure the championship went to one of their proud rallycross nation’s representatives.
Race day at Autodrom Česká Lípa at Sosnová saw the team pondering their strategy. Derek says, “As a team we discussed our tactics for the event and considered just going for the points we needed to secure the title. But we concluded that we may never be in such a great position ever again and the best policy was to go all out for the win.” The gamble paid off as Derek put in one of the drives of his life to take his forth win of the season and with it the crown of FIA European Champion.
It is a remarkable story of how against the odds a small team from a far flung corner of Europe managed to take on the might of the continental rallycross world and through grit, determination, professionalism and a little bit of the luck of the Irish, come out on top. Hopefully it is a success story that can act as an inspiration to others as the nation faces up to more difficult times ahead.