To see one moving around on the ground just emphasises that bulk, as you notice how it dwarfs regular 737s and A320s. It’s on the ground that you really appreciate just how massive the ‘Super-Jumbo’ is.

If you look again closely 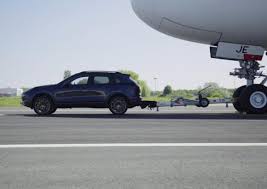 And then you notice the vehicle towing it around. Normally these aircraft tugs are chunky, purpose-built things, powered by big, high-torque diesel engines, but for one day in May, those were dispensed with and Air France allowed one of its fleet of ten A380s to be towed by a conventional, road-standard vehicle.

Now, this needs to be put in perspective. The Cayenne weighs just over two tonnes, the A380 an enormous 285-tonnes. The Porsche is just under five metres long, the Airbus 75-metres. And yet the (comparatively) tiny Cayenne was able to haul this behemoth of the air for 42-metres, out of a hanger at Charles De Gaulle airport.

Well, it was twofold. One point was to set a world towing weight record, in fact beating the previous record for towing by a road-standard car by 115-tonnes. The second was for Porsche to demonstrate that, for all its sporting credentials, the Cayenne SUV isn’t above knuckling down and getting on with some serious heavy work.

But there was a third point, a likely unintentional one. Reminding us all how easy it is to exceed the maximum weight we’re allowed to tow. That may sound like a small point, but it’s one that could cost you rather a lot in fines or in an insurance policy that won’t pay out if you don’t pay attention to it.

With the boon in SUV sales of late, many of us are now in possession of a car with a significantly higher towing weight than we’re used to, and that has lead many drivers to take up the art of towing, whether it be a horse-box to the local gymkhana, a powerboat to the coast, or a caravan for a Father-Ted-style getaway.

The problem is that some of us will be exceeding the maximum towing weight, without even realising it.

By which we don’t mean the maximum towing weight of the car itself. Big SUVs and 4x4s (the likes of a Toyota Land Cruiser or Land Rover Discovery) will generally have a maximum towing weight of 3,500kg for a trailer fitted with its own braking system. Even smaller cars, such as the hugely popular Skoda Kodiaq, will haul more than 2,000kg of braked weight.

So what’s the issue?

The issue is that a combined total of 3,500kg of car, trailer and cargo is the maximum legal allowance for most of us. Most drivers have a simple Category B drivers licence, which sets the maximum train limit at 3,500kg. To haul more than that, you will need a Category BE licence, which involves an extra theory test and the application for the specific licence. Most of us won’t bother, and many of us won’t realise that we’re actually exceeding the weight limits once we fully load up a trailer.

A driver who regularly uses their vehicle’s maximum towing weight of 2,000kg, but whose vehicle itself probably weighs in excess of 1,500kg, is therefore breaking the law, leaving themselves open to a fine and penalty points (between one and three points, and up to €300 of a fine). Worse still, if they have an accident while pulling that trailer, their insurance could well use the breaching of the licence limit as an excuse not to pay out.

You should definitely check out Porsche’s video of towing the A380 online, because it’s a remarkable testament to the engineering prowess of both car and plane. But maybe also use it as a reminder that, even if you’re not pulling around the world’s biggest passenger jet, you can still be over your towing limits.