It was a small thing at the Geneva show last spring, but Skoda took the opportunity to show off a new version of its logo. One which will march the company on into this decade and the most important element of which is the dropping of 'Skoda Auto' from the badge. We guess the company now figures its 'winged arrow' motif is well enough known to stand on its own.

It is the fourth Skoda logo since 1926 and the third to have the winged arrow.

The original laurel-surrounded Skoda name and the badge were used in tandem from 1926, when the company founded by Václav Lauren, and Václav Klement shifted from using the founders' names after its acquisition by the industrial conglomerate Skoda Works.

An interesting thing about the logo is that it is still shared with the current incarnation of Skoda Works, even though Volkswagen acquired 100 percent ownership of the business's car operation in 1999. The industrial Skoda specialises in building locomotives, tramcars and trolley buses, electric drive units, and also operates a consultancy for development of railway stock.

Anyhow, the whole thing got us to thinking about hood ornaments, the things we used to have on cars before we got worried about what they did to unfortunate pedestrians who got in their way.

Familiar ones are the Bentley 'Flying Lady', officially the Spirit of Ecstasy, and designed Charles Sykes in 1911.

It was modelled by Eleanor Thornton, Lord Montagu of Beaulieu's personal secretary and lover. There are two tragic aspects to the 'Lady'‚ the illegitimate daughter which they gave up for adoption, and Eleanor's death in 1915 when the ship she was travelling on was torpedoed by a U-boat.

Another quite beautiful one was the Austin Swallow's ornament (title picture), depicting a swallow in full flight on the Austin 7 derivative of the early 1930s. The mascot came in a number of variations, from a very true representation of the bird to a sleek more modern iteration. The car was upmarket but good value, and in many respects was the progenitor of Jaguar cars.

And of course, the Jaguar 'Leaper' is a classic of its kind.
Although there was an earlier version in 1935, the true beginnings of the current version was designed by automotive artist F Gordon Crosby in 1938. It was supplied to owners as an optional extra, costing two guineas.
The leaping big cat is still available in some markets where not prohibited by safety legislation. Crosby himself began his career as a draughtsman with Daimler, and his Grand Prix art as well as his work for Autocar magazine has left one of the most important legacies of automotive art.

A quiet man who religiously attended the Paris Motor Salons to produce illustrations of new cars, he killed himself in 1943 following the death of his son in the war.

The Americans have traditionally been big into hood ornaments, and one of our favourites is from a brand that GM killed off last year, Pontiac. The famous Pontiac‚"Chief" ornament on the company's cars of the 1940s was no less than 19 inches long, and a master work in chrome.
Obviously it related to the name Pontiac, the city the original wagon company was founded in. In turn, the city had been named after a chief of the Ottawa North American Indian tribe, and the car companys slogan as "The Chief of the Sixes"‚ referring to its 6-cylinder engine of very good repute. 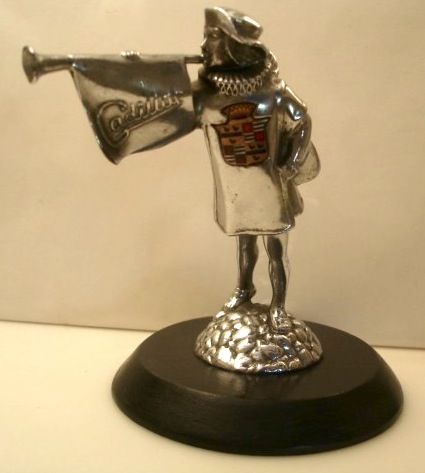 Finally, one of the most whimsical ornaments must be the 'Trumpet Tooter' which was available as an aftermarket accessory on the 1929 Cadillac.

More officially known as the Herald, the statuette mounted on the radiator cap was a medieval herald blowing a straight horn to figuratively announce the coming of the car.

It was the first hood ornament to be approved by Cadillac. A valuable item now, there are more modern reproductions floating around which don't have the class of the original.

There's probably a book on hood ornaments, probably already done somewhere. But after looking around at a few, the new Skoda emblem has a lot of great acts to follow. We'll be seeing it this week on a near-production car to be shown at Frankfurt.

by Shane Teskey
All author posts
Prev
Main
Next
Auto emblems - September 21, 2011 at 10:14 am
The chrome on these classic cars is so hard to beat cuz they re so iconic! I personally love older Skoda logo.