The myth of car reliability - Which brand's are actually the most relaible?

Which brands are the most reliable? If you thought, briefly, about that question and answered ‘anything Japanese’ or ‘Toyota’ then, to be fair, we probably wouldn’t argue with you. If you also or separately answered ‘anything German’ then we wouldn’t have too much truck with that, although there are certainly some exceptions.

The fifth most reliable

What if we asked you ‘what’s the fifth-most reliable brand currently on sale?’ Would you answer, maybe, Seat? Or Skoda? Or Kia? Maybe Hyundai?
Nope, for car reliability it’s Alfa Romeo.
Yes, yes. We’ll wait a moment for you to compose yourself. Maybe sit down and have a cup of tea, as the bewilderment settles. According to the highly respected UK-based Magazine What Car? Alfa is indeed the fifth-best rated brand for reliability.
The survey of brands for 2017 was carried out by What Car? to some pretty stringent standards. Some 14,000 owners were polled about their cars, ranging in age from brand new to three years old, and asked if they’d had any faults or issues with those cars, ranging from small issues to large, cheap to expensive, those covered by warranty and those not.

Surveyed for problems that occurred

Cars were then given a score of 100 per cent, with points deducted according to the severity and expense of any problems that occurred. Perhaps unsurprisingly, Japanese car makers did dominate the list somewhat. Lexus was the best brand overall, with a score of 92.1 per cent, closely followed by Mitsubishi with 90.8 per cent, Toyota with 89.6 per cent, and Suzuki with 86.6 per cent. No surprises there, really — all four brands have exceptional reputations for reliability.
Alfa came fifth, with 85.8 per cent. To put that in perspective, that means that Alfa Romeo beat out the highly-regarded likes of Honda, Hyundai, Subaru, Kia, Audi, Skoda and more to take what must surely be seen as a shock result for the Italian manufacturer.
It certainly reflects what we’ve been seeing on the ground with Alfa in the past few years. Cars such as the updated Giulietta hatchback, and the new Giulia saloon and Stelvio SUV have all been massively improved, compared to Alfa’s old rust-and-breakdown reputation, and look and feel like high quality motors.

Is it all that it seems?

There may be some mitigating factors here. Perhaps there were not that many Alfa Romeo-owning respondents in the survey, and that skewed the result? Perhaps Alfa owners, being on balance more likely to be committed car enthusiasts, were more fastidious in taking care of their cars? Both are certainly possibilities, and if that care and attention point has any truth in it then it reinforces something we’ve been saying for a long time; care is the most important factor in keeping a car reliable and healthy.
Three years ago, Motorcheck polled dealers nationwide and found that a proper, fully-stamped up service history could be worth as much as €1,500 on the second hand value of your car, depending on make, model, and age. Even aside from that financial incentive, it’s a simple truth that the more regularly a car has been serviced, and the higher the standard of the car it has received, the more likely it is to run without major fault, and the easier it will be to sell on.

Looking further down the list, there were some other surprises at the bottom end of the scale. Mercedes-Benz languishes in 23rd place out of 32, with a score of 70.4 per cent, while Jaguar, which normally does well on these surveys, was in 26th place with 61.9 per cent, only just ahead of Peugeot and Citroen. Tesla finished third from bottom with a score of 52.4 per cent, while the worst-performing brand was Jeep, which came dead last with a score of 42.1 per cent. Which is odd, when you consider how many components and parts are shared between Jeep and Alfa Romeo. (In case you’re wondering, Fiat finished just behind Mercedes, with a score of 70.2 per cent.)
Steve Huntingford, editor at What Car? commented: “Japanese brands continue to lead by example when it comes to reliability; the breadth of vehicles with near-faultless scores highlights the engineering prowess of Far Eastern manufacturers. It is also encouraging to see that German car manufacturers are backing up their reputation for quality with strong reliability scores. It goes to show that the old adage that cars are getting more complicated and harder to fix needn’t be an anxiety – as long as consumers choose the most reliable model they’ll be able to enjoy the benefits of the latest technology without the fear of their car letting them down.”

In terms of individual cars, four models finished with unblemished scores of 100 per cent — the Toyota Aygo, the Honda Jazz, the Lexus CT200h, and the Audi A3 saloon (when equipped with the TSI petrol engine). Does that mean it’s OK to buy one of these cars sight-unseen?
No, afraid not. Good though such surveys as these are at revealing interesting trends, there’s no replacement for knowing the history and condition of any car that you’re interested in buying. Check the service record, the condition, the ownership history, and the financial background to every car — and that’s as equally true of a Lexus as it is of an Alfa Romeo. 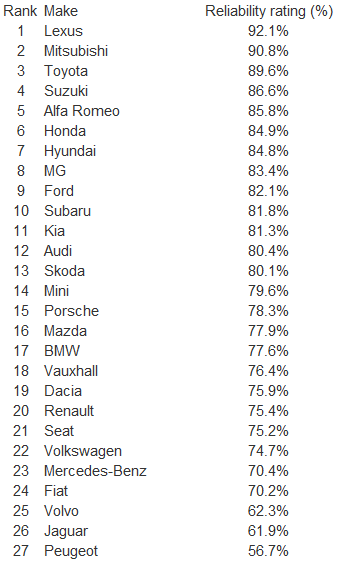